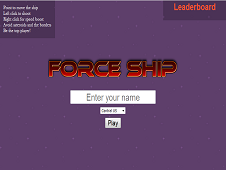 Using the mouse will be more than necessary for you in this awesome spatial game so it's enough for you to just wander there randomly and of course, shooting your opponents with a single mouse movement so make sure that you will be the greatest in this cool and so incredible shooting forceship games so do not hesitate to become the greatest when you get in charge of driving this warcraft all among the space. The goal is to hit and shoot your opponents with your projectiles in order to make sure that you will kill them once and for all, without letting them touch you because a single touch with their laser shoots to you and you are done! Also, avoid the asteroids which are even more dangerous than the opponents and finally avoid getting in touch with the borders of the Universe too, which will also kill you. Have so much fun in this really incredible mission and deal with so many online players in this fantastic multiplayer battlefield with players from all around the world! Do not hesitate to push your limits and overcome them so become a real master in this awesome shooting mission!