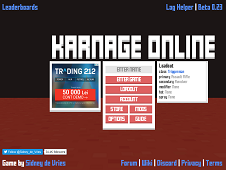 Karnage.io is such a great mutltiplayer adventure, where you have the opportunity to use the mouse in order to shoot different players from all around the chambers! Those chambers are full of obscure light, mystery and different players, online ones, who have the same purpose as you, killing the other players for increasing the personal score and making a huge karnage! Watch out, because the walls of the chambers are made of lava so if you touch them too much, you will instantly get dead! Good luck and avoid get in touch with the lava and make sure that you will become a great shooter, without wasting too much ammo randomly and running out of it! Also, you need to dodge the opponents shoots until they run out of ammo and then it's the right moment for you to shoot them. Leave them no chance in this incredible game and make sure that you will kill before you get killed. Use the W, S, D, A keys or the arrow keys for moving and do not hesitate to hide when you think you are too damaged for the actual round. Try to stay alive for as long as possible and become the leader in the leaderboard!