Zombie in the City

Zombie Run in The Big City 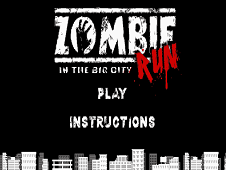 What is Zombie Run in The Big City?

Zombie Run The Big City is such a great, cool and so amazing zombies assault and killing game, which offers to you the occasion to use the mouse in order to kill as many zombies as it is possible so make sure that you won't set free at least one of them so also run if you think they are too powerful because fortunately for you, in this so cool game you actually have the option to run, jumping and dodging them. Your hero, apparently the only one from humans left, is permanently running and jumping over all those buildings and roof tops with the main purpose of avoiding getting in touch with the zombies who have assalted the city. Make sure that you dodge them with no problem and in the end, if you can't avoid them, press the E key for such a great attacking moves meant to turn those undead souls into some real dead ones! Good luck and do not ever fall down from the buildings by landing next to them because this means you've lost so prepare yourself for the greatest chasing run ever possible. Go for it right now and show off, getting rid this world of a couple of zombies and reach as far as you can in order to score an unbeatable high score! Focus right now!

Use the SPACE bar, E key