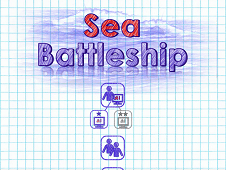 What is Sea Battleship?

Sea Battleship is such a great and so cool shooting and strategy game, where you have to find out which is the best strategy for attacking your opponents in this cool and so tough sea battleship. The goal is to set up the greatest strategy, which involves firstly placing the submarines in the right places, in order to be almost impossible for them to get touched by your opponent's missiles and then, in the end, make sure that you will shoot his submarines and hope that yours are hidden well enough in order to do not get touched by his missiles. So this is a kind of battle and shooting game so you need to focus so much on what do you have to do! The fun part is that each of you will arrange your submarines in a row, without being able to see the opponent's submarines so let's focus and find the perfect recipe for success! There will be a huge table, full of little squared. Eeach column will be numbered and each row has a letter so you should shoot where do you think that your opponent, the CPU or Player 2, because you can play it with a friend, has arranged their submarines! Good luck and have so much fun while you are playing this incredible battleship game!