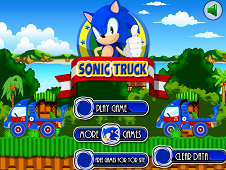 What is Sonic Truck ?

Sonic X has requested too many tasks and things to do so he is absolutely tired of all those and it's impossible for him all alone to accomplish all those missions so that's what he needs you as a help for him! The evil enemy of Sonic is sending too many robots and evil monsters in order to kill our little, fast and blue hero so the goal is to stop them and kill them rightly and also collecting the golden rings, which are so important for Sonic! Fortunately for you and him, there has appeared a huge truck which belongs to Sonic so let's start driving it using the arrow keys in order to collect the rings which will be put up in the cargo of the truck and also crash onto the monster and robots appeared in your face for killing Sonic, smashing them in a single second. Try to reach the end of each mission and level in the shortest time possible and make sure that you will not crash onto anything else but in the monsters who deserve to die. Good luck and apply your driver and monster truck managing skills in the following monster truck sonic X driving game! Go for it right now and turn Sonic into one of the greatest heroes of all times!