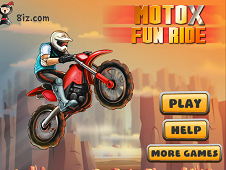 What is MotoX Fun Ride?

Some really tough roads are waiting for you to cross them so watch out and watch your back all the time, in order to get ready for anything you could face during this incredible and so cool motocross challenge game. This guy with a bike is getting ready to race among those tough lands, without getting smashed or killed by getting too damaged with his motocross and as in the rest of this kind of adventures, to goal is to reach the end of each level, nothing different until now. Have so much fun in this awesome game and also, deal with the situation, riding over and over again and earning a couple of money, doing stunts! Do so many stunts with the specifically buttons X, Z, C keys, so you will get the maximum amount of points only after doing those stunts, otherwise you will do just good, not best! Do not get stung by the spikes on the roads and avoid all kind of obstacles and barries possible. Go for it right now and make sure that you will become the greatest rider ever! Do tricks, cross the bridges or hills and get at the end of the mission healthy, following the health metter in the up side of the game screen!