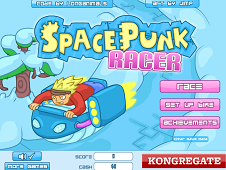 What is Space Punk Racer?

Space Punk Racer is such a great and so cool racing adventure, in a futuristic world, where there are so many spatial ships and students who are longing for having such a great time on this spatial ships, in one of the greatest challenges ever. The purpose from this game is to use the arrow keys in order to race in so many different circuits and laps, maps which will be unlocked by you in a row, with the earned money from previous races. There will be some really difficult roads and your ships are some floaring motorcycles or something like this, but they are not so easy to be driven, due to fact that they can such a high speed, impossible to be overcame by another vehicles. The goal is to reach the finish line the first, without any exceptions, collecting the flashes for extra speed or some bullets and ammo for shooting projectiles. Good luck and have so much fun while you are playing this so fantastic racing futuristic game, with the punk racer, a young student who is going to prove his value right now. Good luck for the last time and make sure that you are the best spatial punk racer ever, unlocking new maps and also new vehicles to drive!