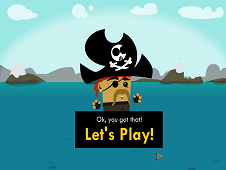 What is Wacky Pirate?

This Wacky Pirate was one of the greatest pirates from here, also known as the greatest pirate ever who was reigning over those places and islands so you have to make sure that you will successfully accomplish each task which he will require from you as soon as it is possible. He has been making a real wealth here, with the illegal transport or selling but right now, since the people started transporting legally their stuff and materials. This is unacceptable for such a famous pirate just like this guy, Wacky Pirate so still in charge with his island, from where he can see all the sea and the ocean, help this pirate shoot the ships which are crossing his part of the see so bomb them and make them blast, losing everything there, in the depth of the ocean. Use the mouse to tap on them and then also tap for adjusting the shooting angle, with bombs, of course! There will also pass pirate ships, illegal ones, friends of yours so avoid shooting them because you will lose money! If a pirate ship manages to cross that surface of water from a side of the game screen to another, you will receive money too! Do not skip a single legal boat because you will lose money and after shooting them, click on the money to collect them. Also click on the ice bergs from the face of the pirate ships for clearing their road!