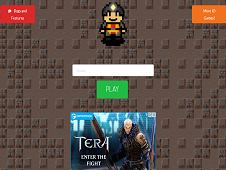 You must have heard about the awesome Bomberman arcade challenge and game, so this game is such a great reloaded edition of the classical version of Bomberman! A special aspect and feature of this game is that this is an online mission, so you can play with players from all around the world and all of you have the same purpose, bombing the other players in order to stay alive the most! Select your character at the beginning of the game and then pick up a name too and then let's get the bombing party started! The gaming field will be a kind of maze so you have to figure it out how to place bombs rightly, only in strategically places for killing as many players as you can. Another different between the classical version of Bomberman and this adventure is that in this game you play against online players and monsters too so you have to take caution about all of them! Bomb them and avoid getting bombed or touched by another players or even monsters and place the bombs using the SPACE bar! With the arrow keys, you will move so collect the health packs if you get damaged. Do anything just to stay alive!