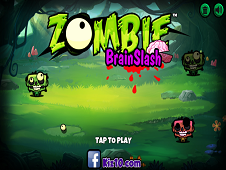 This zombie hunter simply hates all the zombies in the world so you have to adjust his powers and abilities and figure it out how to deal with its so sharp blade, in order to kill and destroy all the monsters possible. On a relaxing background, a relaxing landscape of a forest, everything seems to be alright, until you start killing and smashing the heads of the zombies which are coming to you! Exactly like in Fruit Ninja, you have to drag the mouse in the direction you want to get it and smash by cutting in half all the heads of the zombies which are coming from the bottom side of the game screen to the top. Cut the in half for making their brains spread all over the place and this way you will score more and more points. Watch out, because they are divided in waves and each wave has more and more challenges for you. Also, the coins will appear next to the zombies but they are much smaller so smash them too for collecting them, but still do not miss the chance to get the zombies too so do not miss neither the coins nor the zombies. From time to time, there will appear some human heads next to the zombies ones so do not cut them because if you even touch them, you automatically ran out of a life. You've got three lives so use them wisely, buying new things from the shop if you want!