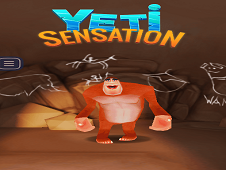 What is Yeti Sensation?

Yeti Sensation is such a great and so cool running and adventure game, where you have to deal with this awesome monster, a mythical one, named Yeti, who wanna run so fast in order to collect as many fruits as possible. There will be a different running game, because now you have to avoid getting smashed by the rolling snowballs, huge ones meant to kill you. Avoid facing them and following the path especially drawn for you, you need to get as far as possible, for making sure that you will score so many points and won't get crashed onto some objects and stuff. There will also be some tree bodies, placed down there on you path in order to stop you so use the arrow keys in order to switch the lane of your path, which consists of three lanes and of course, the up arrow for jumping over huge obstacles and sliding down, will be applied only if you press the down arrow. Make sure that you will not crash your Yeti and hold the direction arrows, left and right, in order to keep Yeti switching the direction, in case you need to collect them all. Good luck and also do stunts and different skills and moves!