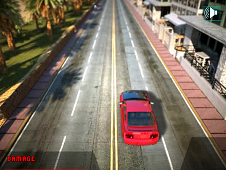 If you think you didn't have enough from what a real adventurous driver can, meet the Red Driver once again, in the fourth version of this incredible and so cool driving and racing game, on the highway! As you know from the previous version of this game, Red Driver 3, Red Driver is just a mysterious character, a driver who's got the speed and the adrenaline in his blood and right now, it must be proven by you, of course, because you are in charge with his car. In the previous version, the car wasn't even red, but black but right now, it is just as red as his name! Let's get to the work right now but this time on a special route, a great highway near the beach! Accomplish a couple of simple movements before the real action starts and switch the lanes and get a nitro boost for making sure that you will successfully rezist for as long as possible. For example, the first task is about rezisting for 40 seconds on highway, without crashing onto another cars, thing which is pretty difficult because of the high speed of this car. Good luck and make sure that you are the best driver ever so respect the indications and the pieces of advice gave by the computer to you!