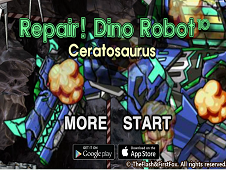 What is Dino Robot Repair Ceratosaurus?

This dino robot is one of the most dangerous ones, due to fact that it is so huge and it also has got so many weapons, huge and powerful ones. First of all, you need to know that using the mouse will be so necessary for you, in order to repair this killing machine, which has just been so much damaged, from a previous fight against some other dino, more powerful than it or it has prepared a better strategy. However, the damaged Dino Robot Ceratosaurus has just arrived here, in the middle of this repairing lab so let's get to the work right now, removing all the damaged steel pieces and different spots on its body, which are too damaged to be recovered. Start with cleaning up the robot's body and do not forget that it is so vital this mission for you. Do not forget that you also must replace the damaged steel pieces so select wisely from the list in the bottom side of the game screen so let's get to the work as soon as possible! Get the robot dino to the fight again because this is such an important piece in the robots army!