Confusion in the Mirrored Castle 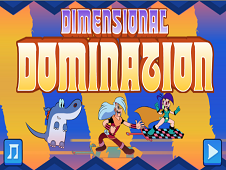 What is Mighty Magiswords Dimensional Domination ?

Such some great characters from the incredible animated series named Mighty Magiswords, this cool and so incredible game offers to you the occasion to use the mouse in order to prove that you are such a real fighter, able to do whatever it takes in order to prove that you are the greatest fighter possible. First of all, you should know that you must keep the mouse holded and drag it in the direction where the monsters are coming from. This isn't going to be actually easy so pay close attention to each details so run from side to side, attacking the other dimensional monsters with your swords. As you kill monsters, you receive new swords, able to use them in the following fights! Action game with the characters of Mighty Magiswords. Protect the world against the domination of monsters from another dimension, in a dimensional attack. Tap and hold, sliding left or right to make the character gain an extra push. His Magisword will do the damage work, yours is to keep him alive.