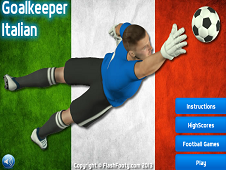 What is Goalkeeper Italian ?

Italy has always had some of the most talented football players in the world, but especially goalkeepers. First of all, you have to know that using the mouse is going to be so necessary for you, in this cool and so awesome adventure, trying to stop those Italian teams, because you will play in maybe the greatest competition in the world, the Italian Cup, to score goals against your team! Having the job of a goalkeeper at the selected team, from three different classes in the Italian football, you have to save three shoots in a row coming from your opponent team, in order to score a goal. The difference between this special goalkeeping game and the rest of this kind of game, which makes this game more incredible is that the goalkeeper scores too, after three saved balls in a row. There will be received by you 9 shoots in each match so being a goalkeeper, you will decide the fate of this tournament for you team! Be the greatest goalkeeper ever, using the mouse in order to move the gloves to save the balls and choose your favourite team from Milan, Juventus, Inter, Napoli, Roma and many more top teams in Italy!