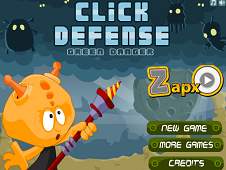 A great defensive base from Earth, tries to defend us from the great assault of the green little aliens, that are coming from the skies, from different galaxies with the main goal of conquering out planet. The only thing we have in common is that either them or us have high tech weapons so we can't surprise each other when it comes to this special domain so let's try to shoot them as soon as possible, because they are too many for a single base so that's why you need to hurry up, collect points and money by killing the opponents and this way you can invest the earned money in some new weapons and rising some bigger fences. They will come down from the skies, with the clouds, and they are so aggresive despite of their little shape and bodies. Don't get fooled by their body and shoot them as soon as possible, clicking on them or keeping the mouse dragged in order to aim successfully and then to shoot rightly. Good luck and become a real master when it comes to this special and so cool shooting defensive mission, trying to rescue our planet for an awful invasion of aliens. Eliminate the green danger and bring back the peace on Earth!