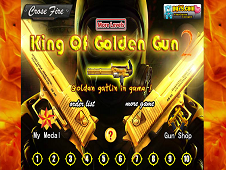 What is King of Golden Gun 2 ?

Being a king of golden gun in the second version of the King of Golden Gun fantastic shooting game, involves so much accuracy and responsiblity so let's get to the work right now, before there it gets too late and prove that you are the best shooter ever, a real master in thsi fantastic and so cool shooting terrorists game. First of all, you need to know that using the mouse will be so necessary for you, trying to shoot all of the terrorists and gangsters with some simple clicks on the direction you want to shoot in. You can't hide only sometimes or run, but face them like a real king of golden gun who you must prove you are, holding rightly two golden deagles which have so much power! Also, the terrorists and gangsters have their weapons too, professional ones also but not even golden so you can die anytime if you do not shoot harder and with more accuracy. Keep in mind that even a king can die if you make the wrong choices so killing many of them, brings you money and that money could be invested in new weapons or even ammo for your fantastic golden deagles!