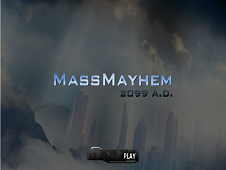 2099 is the year and there are so many things that are not actually so well working so let's get to the work and produce a real mass mayhem in the middle of some of the most important capitals of the city in the world. First of all, you have to know that using the arrow keys will be vital for you in order to move and wander there from side to side in order to run from the opponents or even to flee in some hidden places in order to do not get killed after running out of ammo. The goal is to spread terror all over the world so kill innoncet people with a bazooka or different mass mayhem killing weapons so let's get to the work right now and show off. There will be more levels for you here, in this awesome game with different tasks and each of them require different things from you. For example, in the first level you need to kill at least one man with a rocket so shoot it and them control the rocket using the arrow keys, to go wherever you want it to go. Good luck and have so much fun in this incredible and so amazing shooting adventure!