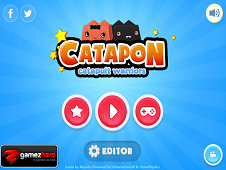 There are some really awful cats and kitten there that must be excluded from that world as soon as it is possible, because they've just started to look so naughty to the incredible little and so pink bunnies so they must disappear as soon as it is possible, because they've just turned into some threats for the world of cuteness. Let's use the mouse in order to drag back the heavy stones from the huge catapult and release in the moment you want to shoot them, after selecting the right direction where they need to go in. Focus on hitting the right black cats, from different areas and zones on those woods and platforms. In the left bottom corner of the game screen you can observe the intensity of the shoot before you take it so adjust it from there and when you consider that you've picked up the right power for the shoot, release and get those damn cats hit! Also, avoid hitting the bunnies, that are some awesome geometrical shapes, pink and so nice but they are fragile too. If you can't shoot them right, then, shoot the platforms as well as they fall on the cats and smash them!