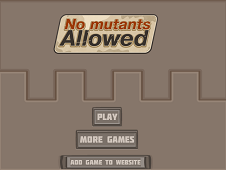 What is No Mutants Allowed ?

Almost all the world was covered by the mutans and their incredible fast power of mutliplying themselves so there must be something to be done about it! The goal is to use the mouse in order to shoot the incoming mutants, that are coming with some really fast steps to the fence especially built up for stopping them. In the left side of the game screen, there will be the fence and behind it, there will be the only survivor in the instance. From the other side of the game screen, there will come so many other mutants and aliens, ready to kill and infect you too but do not allow them! Former animals or humans, the actual mutans are so powerful and so armed right now. Rezist for as long as it is possible, each of them bringing you not only satisfaction but money after killing them. Invest the money for buying new tools, weapons and even hiring new soldiers to fight with you against the mutants opponents. With your powerful guns, they will die easier so focus on achieving some as fast as it is possible!