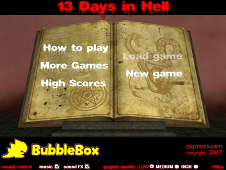 This hero from the mankind dimension has been damned to spend 13 days in Hell, thing almost impossible but it is in all of our interest to help him do it because if he accomplishes successfully this task, the whole humanity will be saved from the zombies attack from now until forever so let's get to the work right now, before there it gets too late and start the shooting mission, because despite of the damning, this guy was allowed to carry a single gun with him and the rest of them may be unlocked if you figure out how to kill more and more zombies, powerful and armed ones, like some zombies and demons mix. Shoot them in the head for extra critical hits, but this won't be enough because they are so powerful that there will be required two or more headshoots for killing them so prepare for the worst! Good luck and pay close attention to the waves that are coming, killing them all and unlocking new guns, reloading by pressing the R key when it's necessary! Good luck and you won't be able to see them so well because of the thick mist from the Hell so survive 13 days there successfully!