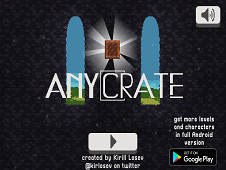 In some pretty dark dungeons, there are going to be two fighters and it's up to you who they are going to be. Either you pick up to play against a friend of yours or against the computer's intelligence, is your choice but the goal is to use X key in order to jump from your platform, not in another place but higher or lower, with the only goal of rescuing yourself from the other opponents' players bullets, that are coming to you so fast. Avoid this thing and make sure that you can successfully deal with this situation, trying to not get touched by a bullet from his gun so the score will be shown to you in the bottom side of the game screen. With the C key you shoot the opponent so watch out because at some point, there will appear wooden boxes and all kind of obstacles, that are meant either to protect you or mess with your image in order to make you become pretty dizzy! Do not get deceived by those kind of stuff and focus on shooting your opponent player, so many times more than he does to you. Good luck for the last time and have fun in Antycrate, this fantastic shooting accuracy game!

Use the Z, C keys