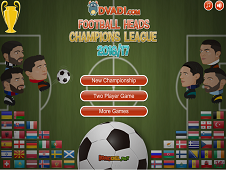 This is probably one of the most incredible football adventure possible, which offers to you the occasion to use the arrow keys in order to move all around the football pitch and the SPACE bar in order to make sure that you will shoot the ball in the opponent's goal, in order to score more goals than them. Select the two players mode or against CPU and pick up a country, then a club team from that country and let's get the game started! Select fans sound, in order to establish if you wanna them be angry or quiet or anyhow you wanna them be, the weather condition and of course, the selected team and the player who represents the team are some really important aspects, that can influence the result in the end of the game. Good luck in this special and so amazing Football Heads Championship and the most expected series of this Championship, the 2016-2017 edition has just been released so enjoy it so much. Go for it right now and become a real football legend, exit the groups and qualify in the final and of course, win it with your favourite team, jumping and shooting so well!