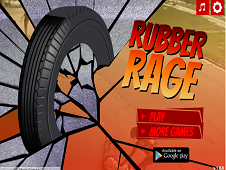 What is Rubber Rage ?

Unleash the rage of this wheel of rubber and hit as many people as you can in the shortest time possible, in this incredible and so cool ability and adventure game. The goal is to use the mouse in order to tap over and over again on the game screen, for making the ball bounce but it won't be enough but the goal is to make it bounce in the head of so many people along its way. This game was inspired from the viral video which has just appeared on Internet with that errant wheel that is hitting a man in his head, appearing out of the blue. The goal is to make sure that you will bounce this ball over and over again, while it will be floating on the air, in the moment it crosses above some human heads and score more points by hitting more heads. The distance covered will be longer and longer as the people hit by you are more and more so let's get to the work right now and become the greatest in this special and so cool adventure, with this special rubber wheel that is crossing all over the city. Good luck for the last time and do not hesitate to bring out the best of you in this superb ability task.