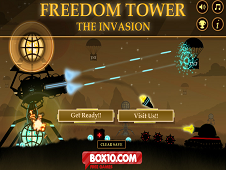 What is Freedom Tower Invasion ?

Robots were created by humans but this time, something went wrong for humans due to fact that robots are too smart and they've finally realized that they could live easily and so fine without the humans who always order them something, working like some slaves for them. So that's why they've ran away and right now, they are working for themselves, producing so much energy that is so useful for any kind of activities, but most importantly, for maintaining themselves as some individual robot kind, without humans. Humans have denied this idea, because they need robots so they are coming after the robots now, trying to destroy them. The robots have been created such a great defense tower so the goal in this mission for you is to use the mouse in order to aim with the target rightly and shoot all the humans that are coming. Bring the robots freedom and with each man killed, you receive and energy ball. Collect it for more energy to your shooting tower and also kill tanks and different objects and weapons which humans use for killing your tower. Good luck for the last time and become the greatest when it comes to this special and so cool tower invasion freedom adventure game!