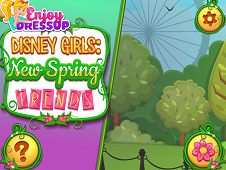 Snow White, Rapunzel and Ariel are some famous Disney princesses, three of the greatest one and such a great fact about them is that all three of them are some modern princess, so they really know what does the fashion means. They are some Disney girls so this involves that they are fashionistas too! Let's help all of them look so beautiful right now because they have such a great idea, but all they still need it a fashion designer, just like you are! Spring has arrived so they've decided to try new dress up challenges, that suit perfectly with the season. The first task is to pick up one of the three princess and then pick a card from three of them. Each of them has a different dress up code scripted on it so after picking up, watch what is written there so let's start adapting the challenge and dress up following the right task. For example, the first task of this game will be to dress up the princess for a garden party so let's pick up the right clothes from the wardrobe in the besides of the game screen. Good luck for the last time, be inspired and pay close attention to the details and be so creative and imaginative!