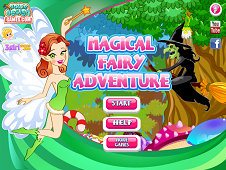 What is Magic Fairy Adventure?

Magic Fairy Adventure is such a great and so cool floating and collecting mission, which offers to you the occasion to use the arrow keys in order to fly there, in this mysterious and awesome fairy world, in order to collect each bonus in a row and of course, to collect the five magic stuff and objects that are so necessary for you. The list of the necessary objects to collect is in the top side of the game screen so when you've collected one, it will appear right there! Also, during the flying adventure you need to collect special gold coins and this kind of special bonuses and also there will be a lot of black magic, released by an Evilish Witch in those lands. Avoid the little demonic flying balls and even the witch itself by dodging it using the arrow keys for switching the direction of your flight so let's get to the work right now, before there will be too late! Take this adventure by yourself and try to become a real legend in this fantastic and so cool magic fairytale mission! Avoid the dangers and obstacles and also, do not avoid collecting each bonuse necessary for you for accomplishing each fairy level!