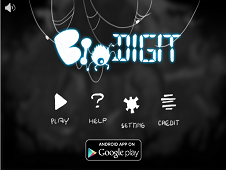 Biodigit is such a great shooting game, between a spider, and electrical one controled by yourself and many other bats that are trying to harm your super hero in the following adventure. First of all, you have to know that the graphics from this game are so awesome and kind of neon ligthing ones so everything will be so cool and electrical! Focus on gathering up so much electrical power at a single place and then release the energy when you've collected the necessary amount of energy in order to shoot the spiders. In the rest of the time, you only have to shoot the bats with some simple laser projectiles so let's make it happen right now, before you run out of moves or bullets. If you get harmed too much and you will really damaged, thing that won't be so nice for you, because you will instantly die. The amount of life left in any bat you need to kill will be written on their bodies so judge by those numbers. Good luck once again and at the end of each level, you need to upgrade your guns and weapons storehouse, learning new attacking mode and buying new weapons too. Use the A or D keys in order to move from left to right in the bottom side of the game screen, so avoid the bats that wanna crash onto you!