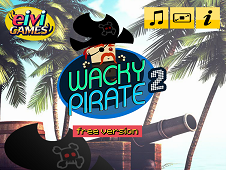 What is Wacky Pirate 2 ?

Wacky Pirate 2 is such a great and so cool shooting game, by sea, where you will have to face so many other ships, that are not trying to kill you or hurt you in any way, but this time just sailor there with no worry about what is going to happen to them. In the bottom side of the game screen, there will be a kind of medieval canon, typical for a crowd of pirates from the old times so let's get to the work right now, before there will be too late and destroy all the cruise ships that are there, by sea or Ocean, whatever it would be. Use the mouse in order to aim perfectly the boats so using the mouse you will select also the intensity of the shoot, because the bombs depend on the intensity you select so make it happen right now. After selecting the right intensity then simply release the mouse in order to be launched the fire bombs to the boats for setting them in fire and sinking them. Become such a great wacky pirate in the second version of the Wacky Pirate shooting series and kill all the boats. After each wave accomplished, try to upgrade your weapons too!