Mario 64 is Personalized but is FNF Mod 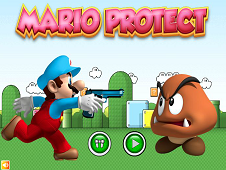 What is Mario Protect ?

Mario has requested this special task, which consists of killing as many little creatures as it is possible because they are not that innocent as they firstly seem to be. Their main purpose is to kill Mario and for this, they need to get down the tower to the scratches, destroying it successfully and for this they need to get in touch with it. Mario Bros is up there, in the top of the tower and his goal is to do not let them reach the tower and he will do this by shooting them! Use the mouse in order to aim perfectly the targets, shooting them in the heads or wherever, for killing them as soon as it is possible. They are coming in waves so as you've accomplished a wave, you've leveled up so you've earned some money. Invest them in new weapons, more and more powerful because the opponents are getting more powerful and more than usually. Good luck for the last time and do not let them touch the tower. Check the tower's life in the top side of the game screen, where there will be shown to you the amount of live left for this tower. Also, there are shown to you the enemies left to come to you in the following wave so let's get to the work right now and defend the tower successfully!