Which Squad are You In 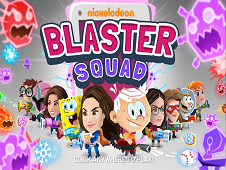 What is Blaster Squad?

Blaster Squad is such a great and big squad, made up from some of the greatest animated characters from the Nickelodeon world, where there are lots of this kind of brave and so awesome guys. The goal in this special mission is to kill all the viruses that are trying to reach the leader of your team so for this, you need to start from the bottom. Select firstly a leader for you shoter band, of course, character from Nickelodeon world and then, from the same list of players and animated characters, you need to select another help for your leader. After this, start the main mission, using the mouse in order to move the leader of the team in different sides of the game screen and bet that the help will follow him! Think with so much strategy and kill the viruses that are coming from the opposite side. Your heroes are shooting automatically so you only have to move them in the right position and direction! Good luck once again and after an amount of earned points and collected golden emojis, you can unlock new powers and of course, new features for your special team!