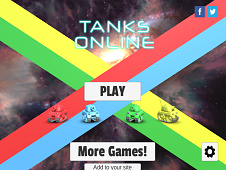 What is Tanks Online?

Tanks Online is such a great and so cool shooting online adventure, which offers to you the occasion to use the mouse in order to shot different players during your special shooting adventure right here, and of course, using the A, S, D, W keys or the arrow keys you will make the movement possible. This isn't actually the easiest task ever so let's make it happen right now, trying to conquer each territory possible, which belong to each colour in a row. Every single tank, will be part of a team and the teams are pointed out by their colours. Each team has their own base, from where they can pick up some health packs if they are too damaged and different places where they can hide from the assaults. If you get killed, you will respawn to your team's base so it is such an important thing. There are players from all around the world so shot them all, with projectiles and fire shots! Make sure that you will work for you team, shooting as many opponents as you team as it is possible so let's make it happen right now, before there will be too late! Do not waste any time and destroy all the opponents tanks!