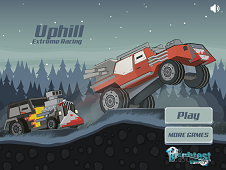 What is Uphill Extreme Racing?

Uphill Extreme Racing is the greater version of Uphill Racing game, which you've might played in the past and definitely liked so much. If you were impressed by that uphill racing game, you will definitely be so amazed by this incredible and so cool extra version of that game, where the challenges are even more extreme, the roads are tougher and of course, the opponents are actually so ruthless! The goal is to pick up a car, a monster truck actually, and to compete against so many other players on those awesome and so damaged roads. Firstly, you must start with a simple truck, not something awesome but a simple and standard model of a monster truck and the only goal to unlock the other models, to the greatest and the most sophisticated one, is winning each race in a row, with a decent amount of points and a great score! Collecting the coins from all the paths is so important, because they may raise your score so let's get to the work right now and try to become the best driver possible, taking care of the really steep hills! Use the nitro boost when you consider and also the break!