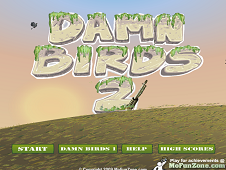 Damn Birds 2 is the second version of the fantastic Damn Birds game, where you also had to shot so many birds, which were so annoying. Since then, not so many things have changed but definitely, for this soldier, is worse than being on the battle field, fighting against another soldiers this situation, when his statue is pooped by the birds all over the day. This must change so when no people are paying attention, aim with the gun from the statue and start shooting as many birds as it is possible. People will think that they've died from some natural causes or anyway, it doesn't matter but the goal is so shot as many of them as it is possible, in the shortest time, with this statue soldier's gun! Reload and when you accomplish the meter in the left side of the game screen, you are done with the level, being ready to getting to the following one. They will be permanently pooping now so make sure that you will avoid getting covered with their poop ever again. Good luck in this special task and adapt to this situation as soon as it is possible, trying to get rid of all of them soon!