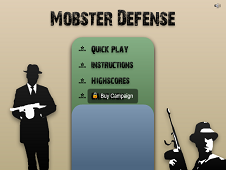 What is Mobster Defense ?

A mobster is in such a great danger, as usual but right now, there is happening something really serious because he has to start almost everything from the noughts, because he has no more men in his clan, so all of them have betrayed him but a single one. Use that left thug to put it through the roads, in strategically place in order to shoot the coming cars with gangasters from another gang who wanna kill your mobster and as you kill them, collecting the money they've left, you will be able to hire new soldiers, who are also some thugs, meant to protect your mobster during the avalanche. Use the A, S, D, W keys in order to move around with your mobster and place in strategically places different thugs, to shoot the coming thugs from another clans, in waves. When you consider that you are done, start the wave as soon as it is possible. Good luck and pay close attention to each detail, trying to not waste too much time and get slaughtered all the other opponents thugs, members of different clans of mobsters. Defend your mobster and create even a bigger army of thugs than the previous one, ending up this mission destroying all the enemies who tried to kill you and reigning over those places again!