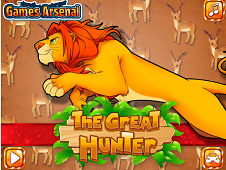 What is The Great Hunter?

The Great Hunter is such a great ability and insight hunting game, alongside the awesome characters from the incredible TV animated series named The Lion King, where there are so many interesting and awesome characters, probably some of your favorite ones, because you must know the majority of them. In this special and simply awesome insight game, you have to catch as many deer as it is required from you, because you have to feed those lions, from this awesome world of The Lion King. You have been waiting a way too much for another adventure alongside The Lion King's characters, because it's really been a while since a game with them has appeared so let's get to the work right now and try to feed them successfully, wasting no time. Use the mouse in order to click on the deer which may appear wherever on the game screen, with the main purpose of feeding different lions, from the smallest to the biggest one. Hunt the deer successfully and this way you will successfully make the lions feel so satisfied. The deer may appear even in the sky but there will also appear another kind of objects or creatures, meant to make you dizzy and click on them too, but this isn't allowd so pay close attention and do not run out of time!