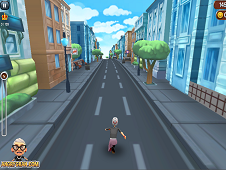 What is Angry Gran Run London?

Angry Gran is supposed to be kept right now in an asylum in the middle of the UK, or at least this is what the ones who locked her there think, but they are terribly wrong at this moment and that's because she is free right now, escaped from the asylum and all she wants is to smash punks from the streets of London, as she has done in the past in uncountable states and cities from all over the world so let's get to the work right now. There are so many obstacles for you to avoid, fences to jump over, trucks to slide under and this kind of special stuff that are meant to stop you from reaching the end of the mission. Narrow streets where a single wrong move is enough for getting trapped and losing the game so with all of this, you have to deal, somehow. Use the arrow keys in order to jump or slide down and the D and A keys in order to to left or right. The choice is yours, judging by the situation you are involved in every moment so make sure that you will also collect coins and smash as many punks as it is possible, crashing onto them on purpose. Good luck and pay close attention to everything around you, also collecting the characters that are making up different words and they may bring you additional bonuses.