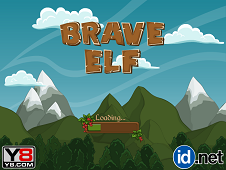 What is Brave Elf ?

There is well known that elves, are the natural enemies of goblins and orcs of course so in this special and so cool shooting accuracy game, the goal is to use the mouse in order to successfully aim and shoot the other creatures among the woods, trying to build up your hero's a name as soon as it is possible. This elf is so brave because he's the only one able and brave enough to try to face different orcs and goblins by himself, so you have to do something about it and kill the creatures trying to kill him, with his archery skills and using the bow and the arrows available. Use the A, S, D, W keys in order to successfully get over your opponents soon, so kill them now! Reload with the R key and jump with the mouse, climb on hills, hide behind boxes and strike from the shadow, collecting chests and different bonuses from the forest and become the greatest adventurer ever alive on those lands, especially being an elf, not an ordinary fighter. Good luck and pay close attention to each detail and do not forget that it is a must for you to prove that you are a great shoter, and in a world dominated by the goblins and orcs, point out yourself, as a superior being, a brave elf!