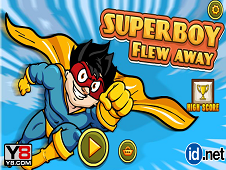 What is Superboy Flew Away?

Superboy is such a great teenager hero, probably the latest hero appeared in the super heroes world so let's get to the work right now, before there will be too late, successfully trying to reach the highest amount of points ever. Make sure that you will not miss a single coin from all of them arranged in bunches, so it will be almost impossible for you to collect all of them at once, but at least the majority it would be indicated. This boy has so many enemies because a lot of monsters have already found out his potential and that's why they wanna kill him as soon as it is possible so you have to try to stop this right now! Make sure that you will kill each doubt and avoid the monsters floating in the air, jumping over them or getting under them, how do you want because the control is in your fingers! Superboy will be permanently flying so all you have to do is to keep him in the air, by pressing the SPACE bar for this. If you leave the SPACE bar, the falls so in the moment he touches the ground, you've lost. Also, avoid getting hit in different obstacles or anything like this so let's get to the work right now!

Use the mouse, SPACE bar