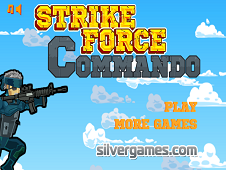 What is Strike Force Commando?

Strike Force Commando is such a great shooting, killing and avoiding game, which offers to you the occasion to use the mouse in order to shoot different players, so aggresive and well armed of course, not only with fire guns but also with sharp blades. This guy seems pretty rusty because of his age, but you may be wrong so let's join him and try to shoot different players, enemies of this guy, trying to kill him but you must be faster. Good luck in this incredible try and strike with the whole force, as a ral commando force soldier! Do not forget that there are dangerous enemies, because of his status so they will attack your guy in ambush, more at once, not only one or two. Avoid at the same time, fire shots, laser shots and blade cutting tentatives and make sure that you will kill them firstly, shooting them in strategically places but do it so right, because it is not enough being skilled and experienced, because the armor of your guy won't rezist forever, especially judging by the number of the opponents. Good luck and show off, trying to become the most incredible shoter ever, a main piece in the system of Force Commando Soldiers!

Use the arrow keys, mouse