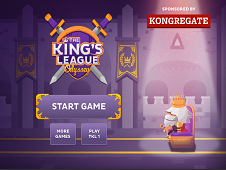 What is The King League Odyssey?

The King's League Odyssey has been sent in the mission of their life time, becuse this such an important mission, must be successfully won and conquered by you in the shortest time. Let's get to the work as soon as it is possible and try to make sure that you will become the greatest fighter ever, doing the right thing especially when it comes to the strategy of attacking, or defending with your special hordes of soldiers. There will be so many soldiers of yours and you have to buy even more and more ones, with the money earned from the previous fights. Get to the work and in the up side and bottom side of the game screen, there will be some special panels, which allows you to control everything about the hordes of soldiers which need to be released by you. Good luck in this incredible and so cool Odyssey King's League challenge and prove that you are the greatest fighter and military commandant ever. Do not forget that it is so important for you to pay attention to the details and never let yourself defeated by any oppnent, it doesn't matter the circumstances.