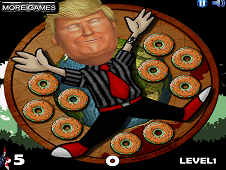 What is Trump Dart?

Darts is probably one of the most incredible insight and ability game, because throwing an arrow to the center of a table with so many numbers on it and calculating your score after each hit, then decreasing from the total of points requested by each player at the beginning of the game, the amount of points after each round, isn't actually the easiest thing possible. Right now, you have the occasion to play probably the greatest version of Darts you've ever played or tried, a special version of Trump Dart! Donald Trump, the notorius president of the United States of America, is in the middle of the darts table and around him, where are a lot of donuts! The table will be permanently spinning so you have to aim with the darts steel arrows, the donuts around the president. If you touch him and get Donald Trump injured, you've instantly lost. Make sure that you will aim successfully the donuts in the besides of Donald Trump and become a real master in this incredible ability tossing game. As you advance in levels, the speed of the spinning increases so you have to keep aiming the donuts!