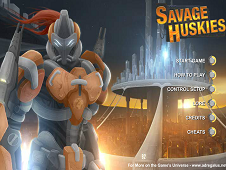 What is Savage Huskies ?

Savage Huskies is definitely the greatest game to play, when it comes to this amazing and so cool exploring world so let's get to the work right now, before there will be too late, exploring this whole world in the savage version of it. The goal is to use the arrow keys in order to move there with your robot, for seeking for civilization, or any kind of trace which may be useful and used as a clue for the theory of existing another life beings on another planets. If you meet robotical hostile forces, and bet you will, you have to eliminate them as soon as it is possible, shooting them with the S key, hitting them with your robotical fist with the D key. There are creepy robots and all of them want to harm you so check your health in the top side of the game screen and the amount of ammo left until it will automatically reload, and judging by them, attack the opponents. You can't run so fight, because they are coming from every side so as you advance and get deeper and deeper in the adventure, the amount of them increases and they will be more and more. Good luck and avoid getting killed by another robotical beings from another planets and become the greatest survivor ever!