Fireboy and Watergirl in The Crystal Temple 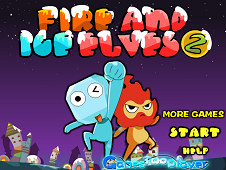 What is Fire and Ice Elves 2 ?

Fire and Ice Elves are a kind of Watergirl and Fireboy, but with some elves as the main characters. This cool and so incredible game, is a kind of update of the previous one, because it is the second version of Fire and Ice Elves. Everything you have to do in this awesome and so cool chasing and running game, is to use either the arrow keys or the A, S, D, W keys to control both of the elves, in order to collect all the diamonds and different precious gems and pieces during your road, and finally reach the meeting spot with both of the characters, alive. Make sure that you won't miss this chance and become the greatest elf controller, asking a good friend to play this game with you, because it only can be played in two players! There will be some kind of water spots, and judging by their colours, you can step only with one of them on that spot and this way you will create the opportunity for the other to step there too, but only while the available one is on that step. Good luck and never fall in the traps or pits, avoiding different obstacles during the road too!