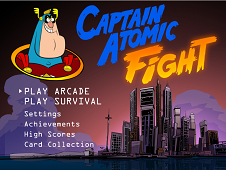 What is Captain Atomic Fight ?

Captain Atomic is right here, prepared for one of the greatest fight tournament he ever dreamed about getting through so let's get to the work right now, trying to win the competition, beating all the opponents not necessary in record time, but of course, dominating them in order to leave them no chance to win. Start with picking up the gaming mode so select either the survival mode or the arcade one, so may that the best wins this incredible fighting competition, for real super heroes. Captain Atomic is not a puppet anymore so the enemies would better fear him so let's get to the work right now and use the arrow keys in order to move all around the battle area, and the up arrow to jump. Also use the bottom arrow in order to get down, for dodging some high kicks! Use the Z and X keys in order to hit with some punches, powerful ones and in strategically spots and of course, some legs kicks, low kicks, middle kicks or even high kicks if you mix the keys and press at the same time the up arrow key and the leg hit one! Good luck and make sure that whichever game mode you pick, you won't give up until you conquer the final battle and win the whole competition!