Baby Boss Back In Business

Baby Boss Back In Business 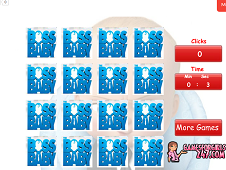 What is The Boss Baby Matching ?

Hey guys! The Boss Baby is still here so right now, he is challenging you to solve this special matching cards task, nothing foreign for you apparently, but the rules are pretty different right now from what you've known until now. Firstly, you have to know that there are more cards than usual and there will be felt by you the time pressure, because in the right side of the game screen, there is the timer, which indicates you the all the time how much time has been passed since you've started the game so pay attention because finishing everything in record time, is a performance and something to chase! Use the mouse in order to click on the cards in order to turn them with their images upside, to recognize them this way and match the pairs of them. Next to the timer, there will be shown to you the amount of clicks used too so make sure that their number is as low as it is possible, for extra points too. At the end of the game, there will be shown to you the time you've managed to get until solving the task and the amount of clicks. Replay the game until you beat your score, getting a lower time and a lower amount of clicks too!