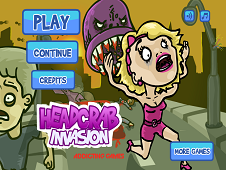 What is Headcrab Invasion?

Headcrab invasion is such a great ability, action and shooting game, which brings you the opportunity to hit the people, killing them in the shortest time possible, with the power of this headcrab, which is so huge. This little purple monster is so sticky so once he is released, it will automatically stick on the head of people. At the beginning of the game, there will appear a kind of meter for you, and a needle will be permanently spinnig so if you manage to click on it and stop in on the green area, you will launch the needle with so much power, thing which is so positive for you. The distance is an important thing so in the top side of the game screen, there is the amount of life left for each guy. After killing one, click to jump to the other one from the crowd but if you fall down, without catching any man, you are dead! Make sure that you will aim and catch Ivan characters, some kind of old men with guns too so there will also appear some meters and clicking to catch the needle in the green area, will allow you to shoot other citizen, thing which will increase your final score. Good luck and make sure that you will produce such a great headcrab invasion!