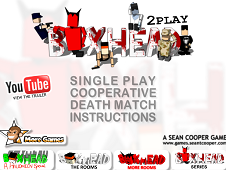 In bokshed 2, the goal is to survive firstly and then to kill as many monsters as it is possible so let's get to the work right now, before there will be too late and try to kill the other zombies, crawling and brain washed creatures, that are trying to kill you and eat your brain. Firstly, you'll start in a kind of maze, pretty easy to escape from, because the purpose isn't to get stuck there, but to get out of there and kill the real threats, the zombies and different monsters! The mini maze is made of some explosive burrels, which you can use for blasting next to the monsters, trapping them into a bloody trap for them and some little boxes, which are anti shooting so they are kind of protective, like some little shileds. Let's start moving there, using the arrow keys and with the SPACE bar, you will shoot the monsters. There is no time for pause or upgrades in this awesome game so you will be announced, while you are still shooting, the unlocked weapons and the key buttons to use them. Good luck and make sure that you will make the right choices and this way, kill all the possible mosnters which are chasing you. As you advance in levels, there will come monsters able to shoot you to, bosses so kill them all too!

Use the SPACE bar, arrow keys