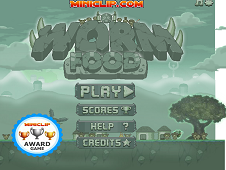 What is Worm Food ?

A huge worm is ready to kill and destroy anything but it isn't an ordinary one, but a huge version of a real one, a mutant worm which no one has any idea who it has been created but the point is that it must be avoided in the shortest time, because from a single contact with any people from the outside space, it is able to kill hundres of people or even more, if there is the case. Let's start this awesome mission right now, controlling the underground worm with the arrow keys so accomplish the purpose, getting the work as big as you can, until not even the ground successfully frame him. There is a big image so in the top side of it, there is the human world, as we know it and in the bottom side, there is the worm's territory, full of ground everywhere. You need to use the arrow keys in order not to dig down, but to reach your worm at the surface, jumping from the ground and catching with its mouth as many people as it is possible, trees, buildings and different objects which stays between you and accomplishing the goal of getting the hugest worm ever. Go for it right now and pay close attention to the details and make sure that you will waste no time!