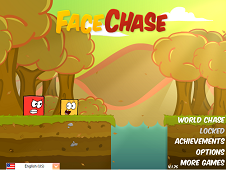 What is Face Chase ?

Face Chase is such a great running and chasing game, where you, alongside your square character, need to run as fast as it is possible in order to reach the farthest possible. Let's get to the work right now, before there will be too late and make sure that you will become the greatest runner possible, never getting caught by the one who chases you, which is such a great character just like yours, but red colored one and he is pretty much bigger. Now, do not focus on him, but keeping up with the speed of the game so only if you get stuck in someting or you fall, the red character is coming after you, closer. You have to keep the distance so do it by jumping over the platforms, some special arranged ones, hills, avoid the pits and of course, collect all the stars available for you, which are in play. Go for it right now, before there will be too late and never let the other face, which is chasing you, to catch you. Good luck for the last time and use the up arrow key in order to jump, for avoiding the dangers so also watch the fallen trees in order to do not get stuck in them.